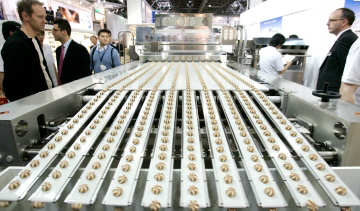 UK Machine Knives were invited to meet with a large multinational confectionary brand manufacturer. The organisation had recently moved away from the supply of their blades and anvils from their Original Equipment Manufacturer (OEM), and were now experiencing cutting issues which were impacting on the business.

How could we help them?

The OEM called us to meet with them. After examining the knife and anvil they had switched to, we changed the radius on the anvil and the tooth form on the blade. We then upgraded the quality of the steel they had been buying. The confectionary customer then ran our blades on machines next to the non-OEM blades they had been buying. Not only was the cut pattern better using UK Machine Knife blades, but their longevity increased by 4 weeks, saving valuable time and money.

“After having ongoing cutting problems, as well as wear resistant issues with our supplier, causing increased down time and poor quality cuts, we decided to revert back to the OEM along with their knife vendor UK Machine knives. After we explained the issue, they visited as a team, looked at the problems we were experiencing, and made some adjustments to the blades. Upon running the tests, they were as good as their word.  The problems were solved, down time has been reduced, we are not using as many blades, and the finished package looks better.

Thank you guys for all your help”